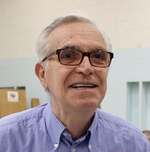 Charles Coffaro passed away on Tuesday evening at his home surrounded by his family. He was 78 years old.

Charles was born in New Brunswick on June 12, 1941 and was the youngest of 11 children. He was a graduate of New Brunswick High School where he was a baseball athlete. After he graduated, Charles enlisted in the United States Air Force where he served our country honorably. He worked in sales for Prudential Insurance before moving to Mt. Pocono, Pennsylvania with his wife Mary Ann to raise their family. In the Poconos, Charlie and Mary Ann proudly owned and operated Coffaro's Pizzeria for almost 17 years. After selling the business, the Coffaro's moved back to New Jersey and have resided in Somerset since 1998.
Charlie loved to sing, make people laugh, and eat breakfast at his favorite diner. He also loved playing cards, listening to jazz music, and spending time with his grandchildren.
He was predeceased by his sisters Catherine Holsten, Julie Copperthwaite, Frances Cannone, Isabel Coffaro and Rita DeMarco and his brothers Anthony Coffaro and David Coffaro as well as his sister-in-law Alfreda Dzergoski.

Charles is survived by his loving wife of 49 years, Mary Ann, and their four children: Gavin Coffaro and his wife Joananne, Colin Coffaro and wife Marissa, Nadine Griffiths and her husband Chad and Candis Ranges and her husband Michael. Charlie is also survived by his brother Peter Coffaro and wife Marlene, sisters Florence Mariano and Adele Ruperto as well as his mother-in-law Adele Miara and brother-in-law Dennis Dzergoski, brother-in-law, Mario Cannone, and sister-in-law Catherine Coffaro. Charlie adored his nine beautiful grandchildren Mackenzie, Jake, Nick, Max, Dean, Camryn, Devyn, Reese, and Michael John as well as his many nieces and nephews.

Funeral services will take place privately and a memorial will be held in the future. In lieu of flowers, please consider making a donation in Charles Coffaro's name to the Memorial Sloan Kettering Cancer Center.