In Memory of
Claire
Johnson (Zimmerman)
2020
Click above to light a memorial candle.
Memorial Candle Tribute From
Gleason Funeral Home
"We are honored to provide this Book of Memories to the family."
View full message >>>
Send Flowers
Plant a Tree In Memory of Your Loved One
Click Here
Menu 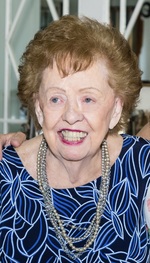 Claire Johnson (nee Zimmerman) passed away on Monday March 23, 2020 at her home in Palm Coast, Florida. She was 88 years old.

She raised her family in East Brunswick and retired to Hudson, Florida prior to moving to Palm Coast a few years ago. She was a longtime parishioner of St. Peter the Apostle R.C. Church in New Brunswick where she served as a Eucharistic Minister. She loved dancing and Broadway shows and will be missed dearly.

Funeral services are taking place privately under the direction of Gleason Funeral Home 1360 Hamilton Street in Somerset. A public memorial may be announced in the future.

The family suggests sending memorial contributions to either St Jude’s Hospital or the American Cancer Society.