In Memory of
Edward
Lubowicki
2020
Click above to light a memorial candle.
Memorial Candle Tribute From
Gleason Funeral Home
"We are honored to provide this Book of Memories to the family."
View full message >>>
Send Flowers
Plant a Tree In Memory of Your Loved One
Click Here
Menu 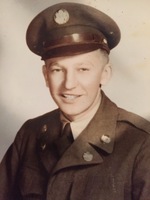 Mr. Edward F Lubowicki passed away from complications of cancer on Friday March 20, 2020 at Haven Hospice Center at JFK Hospital in Edison. He was 92 years old.

He served our country faithfully in the United States Army and was a Disabled American Veteran.

He was the founder and former president of Lubowicki Insurance Agency in Metuchen and nominated Salesman of the year by Life Magazine. Mr. Lubowicki was a published author. He was a strong supporter of the game of lacrosse and enjoyed watching his grandchildren play the game.

Due to the current events, funeral services will be held in the future.