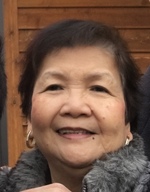 Egonia Bonoan (affectionately called Gigi), 73, passed away on Friday, March 20, 2020 at her home in Somerset, New Jersey, with her family by her side.

Gigi was born on April 04, 1946 in Bauang, La Union, Philippines to the late Telesforo and Natalia (Valdez) Albarillo. She immigrated to the US in 1970 and settled in Passaic, NJ. In 1974, she relocated with her family to Somerset, NJ.

While residing in the Philippines, Gigi attended Baguio School of Nursing. In the 1980’s, she attended St. Elizabeth University, where she earned a BSN. Gigi was a registered nurse for Passaic General Hospital and Robert Wood Johnson Hospital of Somerville (formerly Somerset Medical Center). She was a longtime and devoted parishioner of St. Matthias. In her down time, she loved to travel the world and to visit Atlantic City to try her luck. She also loved gardening, Filipino Soap Operas and making jewelry. She was very outgoing & was the life of every party.

All services will be private and under the direction of the Gleason Funeral Home.