In Memory of
Loretta
Williams
1932 - 2020
Click above to light a memorial candle.
Memorial Candle Tribute From
Gleason Funeral Home
"We are honored to provide this Book of Memories to the family."
View full message >>>
Send Flowers
Plant a Tree In Memory of Your Loved One
Click Here
Menu 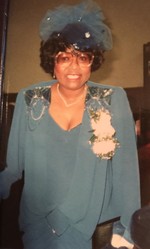 Loretta Williams was born August 15,1932 in Pensacola Florida, to the late Joshua Wesley and Margaret Wesley Adams. She was called to rest by our Heavenly Father on Wednesday, February 5, 2020 at Saint Peters University Hospital in New Brunswick, New Jersey. In 1948, Loretta was united in Holy Wedlock to the late James Williams. This union was blessed with eleven children, 7 girls and 4 boys. The family moved to Newark New Jersey and relocated to New Brunswick New Jersey in 1968. Shortly after Loretta moved to New Brunswick, she joined First Baptist Church of Lincoln Gardens in Somerset New Jersey. She was a member of the Senior Choir for many years and Gospel Inspiration in Detroit, MI. Loretta worked for the Board of Social Services in New Brunswick before retiring in 2000. She enjoyed looking at pictures on Facebook, watching gospel videos, reading, cruising to the Caribbean and relaxing on the beach in Aruba. Loretta was a kind hearted and gentle spirited person, always had a smile and kind word. She was devoted to her children, grandchildren, great grandchildren and great-great grandchildren. She was pre deceased by her son, Frank Williams; her brothers, John and George Adams. Her sisters, Louise Thompson, Margaret Bascome and Marie Raynor. She Is survived by her sons, James Williams, Richard Williams, and Ronnie Williams and his wife Kitty Montanez; her daughters, Malvina Williams, Rosetta Williams, Wanda Stokes and her Husband William Stokes, Angela Williams and her husband Wesley Bolton, Valerie Williams, Velvet Williams Cooper and her husband Duane Cooper, Margaret Sanders and her husband Charles Sanders; her sister, Ruth Evans and her daughter in-law Judith Williams. She is also survived by her 23 grandchildren, 32 great grandchildren and 5 great-great grandchildren and a host of nieces, nephews, and extended family.