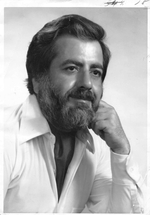 Mr. Paitakis was born October 02, 1937 in Elizabeth, New Jersey to the late John and Helen (Kavilache) Paitakis. He was raised in New Brunswick and moved to Piscataway, where he lived for 20 years. He then relocated and settled to Princeton, NJ.

George was a longtime member of St. George Greek Orthodox Church in Piscataway, where he was part of the Cretan Society. He was an entrepreneur/business owner; he owned and operated Salon 27 in Kendall Park, a hardware store and managed many rental properties. George obtained his pilot’s license and enjoyed flying his planes. He also loved to travel with his loving wife.

Mr. Paitakis was preceded in death by his brothers, Constantine, Stephen and Christ Paitakis and his sister, Katherine Mangelos.

He is survived by his loving wife of 53 years, Maryann Paitakis and a host of nieces and nephews.

Visitation will be held at St. George Greek Orthodox Church on Monday, November 4th from 11:00 A.M. to 1:00 P.M. Funeral services will follow at 1:00 P.M. Burial and services will continue at Elmwood Cemetery in North Brunswick.