In Memory of
Ellie  V.
Jankowski
2019
Click above to light a memorial candle.
Memorial Candle Tribute From
Gleason Funeral Home
"We are honored to provide this Book of Memories to the family."
View full message >>>
Send Flowers
Plant a Tree In Memory of Your Loved One
Click Here
Menu 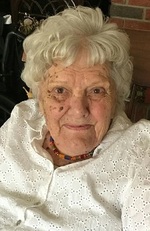 Eleanore “Ellie” Jankowski, age 94, of Somerset, New Jersey, passed away at home on July 31 after a period of declining health. Ellie was born on January 22, 1925, in Stirling, New Jersey. She was the daughter of the late John and Sophie Kolenski and the beloved wife of the late Stanley “Stan” Jankowski. She was predeceased by her husband Stan in 2003. She was also predeceased by her brother Henry Kolenski and sister Teresa Balek.

Stan and Ellie met at a Plainfield High School football game and married in 1946. In 1955 they settled in “Middlebush.” Middlebush was where Ellie and Stan raised their five children. Through 64 years, countless happy celebrations, milestones, and accomplishments were celebrated in their home there. Ellie also volunteered her time as an active member of the Middlebush Volunteer Fire Department’s Ladies Auxiliary. She was a founding parishioner of St. Matthias Church in Somerset and a member of the Altar Rosary Society at St. Matthias.
Ellie was a loving and caring daughter, sister, wife, mother, grandmother, and great-grandmother. Family was always at the center of her life. She is survived by her children Janet Bonsall and her husband Richard of Charlotte, NC; Paul Jankowski and his wife Kelly of Lancaster, PA; Karen Houser and her husband Ross of Greenville, NC; Robert Jankowski and his wife Alice of Manville, NJ; and Douglas Jankowski and his wife Wendy of Somerset, NJ. She is also survived by 14 grandchildren and 13 great-grandchildren. She was cherished and will be greatly missed by many.
The family will receive friends on Friday, August 16, 2019, from 2 p.m. to 4 p.m. and from 7 p.m. to 9 p.m. at Gleason Funeral Home, 1360 Hamilton Street, Somerset, New Jersey. A funeral mass in celebration of Ellie’s life will be held at St. Matthias Catholic Church, 168 John F. Kennedy Boulevard, Somerset, New Jersey, on Saturday, August 17, at 10 a.m. Interment will follow at Resurrection Cemetery. Please consider a contribution in Ellie’s name to the St. Jude Children’s Research Hospital at www.stjude.org