In Memory of
Archibald
Gomonie
2019
Click above to light a memorial candle.
Memorial Candle Tribute From
Gleason Funeral Home
"We are honored to provide this Book of Memories to the family."
View full message >>>
Send Flowers
Plant a Tree In Memory of Your Loved One
Click Here
Menu 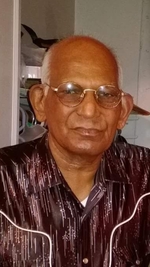 Mr. Gomonie was born in Guyana and resided in New Brunswick since 1985. He worked as a mechanic for many years both in Guyana and in New Jersey. Later, he worked for St. Peter’s Hospital and retired from Pathmark.

He was pre-deceased by his three daughters: Anjani, Jasmatie, and Phulmatie

Mr. Gomonie is survived by his loving Wife Lillowtie and their children Mahesh, Haresh, Rewal, Naresh, Dilmatie and Khemwatie. He is also survived by his sister, Reena and thirteen grandchildren.

Mr. Gomonie has led a substantial life, filled with love and left a legacy. He will always be in our memory and thoughts.